Home » Health » What are the signs and symptoms of vitamin B12 deficiency? 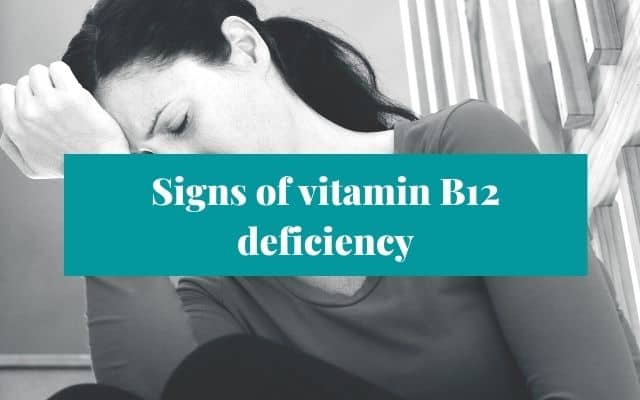 Vitamin B12 is an essential vitamin for DNA synthesis, nerve cell development and function, and red blood cell synthesis.

Unfortunately, vitamin B12 deficiency is common because symptoms can be nonspecific and are easily misdiagnosed.

Vitamin B12 is mainly found in meat, poultry, fish dairy, and eggs.  If you regularly eat these foods you are likely to have optimal levels of vitamin b12 unless you have other medical conditions that may prevent vitamin b12 absorption.

What is the main cause of vitamin B 12 deficiency?

There are many causes of vitamin B12 deficiency. These include factors such as;

What happens when you don’t have enough vitamin B12? You get a condition called megaloblastic anemia.

Megaloblastic anemia can be caused by a deficiency in either vitamin B12 deficiency or folate deficiency.

Folate is vitamin B9 and both folate and vitamin B12 are needed to make healthy red blood cells.

And when megaloblastic anemia occurs the red blood cells are formed are large-mega, and don’t function properly.

This then leads to anemia and an inability of these cells to carry oxygen to all the cells in the body.

All cells in the body need oxygen. Without sufficient oxygen, symptoms of B 12 deficiency start to show up.

Signs and symptoms of vitamin B deficiency.

It is easy to be deficient and not know it at least in the early stages as the signs can be subtle and easy to miss or dismiss at first.

Symptoms of vitamin B12 deficiency can be very diverse and can include neurologic symptoms even all the way to some psychiatric problems.

As you can imagine with a vitamin that affects oxygen transport in the body, DNA synthesis, and nerve cell function the symptoms are many. So let’s examine these symptoms. 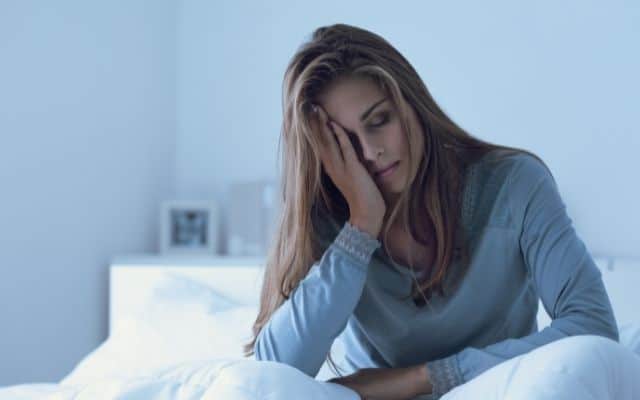 When you are deficient in vitamin B12 you may experience weakness and fatigue. Since vitamin b12 is needed for the production of red blood cells which transport oxygen to the cells, without sufficient oxygen you become anemic.

Cells cannot make energy and metabolic functions are affected causing you to feel weak and tired.

Determining the cause will help in the right treatment because if you have megaloblastic anemia, it may be caused by a folate deficiency or a b12 deficiency.

Either deficiency leads to impaired DNA synthesis and immature, misshapen large red blood cells which lack the ability to carry oxygen to your organs.

Pins and needles in hands and feet

Pins and needles in hands and feet are another sign of vitamin b12 deficiency.

This sensation of tingling and numbness in hands and feet is neuropathy that many associates with diabetes but is also caused by b12 deficiency.

B12 helps to maintain myeline the protective sheath around the nerve fibers. This sheath also ensures efficient nerve transmission, but when it wears off nerve communication is impaired leading to neuropathy.

You are colder than usual 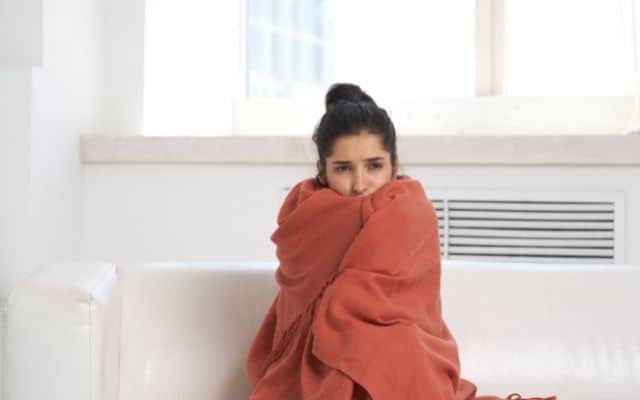 When you are deficient in b12, you feel colder than usual, especially in your hands and feet.

Remember you need a rich supply of red blood cells to keep your body healthy and to supply all the organs with oxygen.

So without enough red blood cells, the body will try to supply the, most essential organs like the brain and leave the hands and feet and this causes you to feel colder in the hands and feet but generally colder all over than usual.

When you have a vitamin b12 deficiency your body makes abnormal red blood cells that are large and delicate.

And due to being delicate, these cells tend to break down easily.

When these red blood cells break down the release of bilirubin gives the skin a yellowish cast that can also make the eye whites look yellowish.

Additionally, the skin may look pale due to a lack of sufficient oxygen. Remember you need healthy red blood cells to deliver oxygen to all organs including the skin.

When you have a b12 deficiency, you may find that you have brain fog. You experience forgetfulness,  lack of concentration, unclear thinking, and are slow completing tasks.

B 12 is essential in central nervous system function and a deficiency means your brain function is affected impairing your ability to think clearly.

And in advanced stages, cognitive impairment can occur leading to signs of dementia.

In fact studies including this 2020 study found a reversal in symptoms of cognition and memory impairment after subjects were treated with vitamin b12.

If you are experiencing brain fog, and impaired memory and cognition, a b12 deficiency may be implicated.

When vitamin b12 goes too long without being treated, neurological problems can get worse. You see vitamin b12 is required to generate and maintain myelin, the protective sheath around nerve fibers.

This at first causes one to experience peripheral neuropathy, pins, and needles in hands and feet, and eventually muscle weakness. 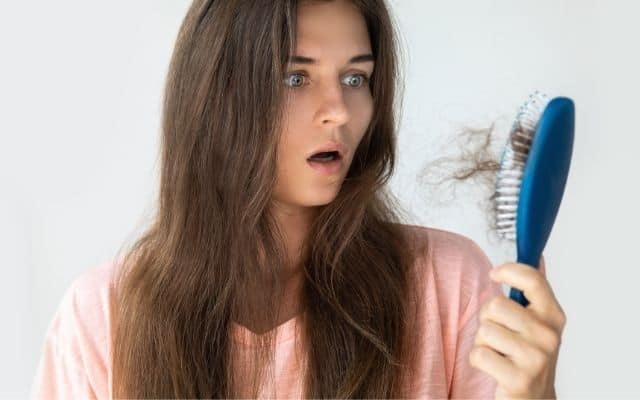 There are many causes of hair loss, especially in women.  So it is important to get to the bottom of it when you notice increased hair shedding and thinning.

However, by the time you notice actual thinning in hair or bald spots, you may have been losing hair for a long time.

Some causes of hair loss may include thyroid health problems, B vitamins deficiency especially vitamin b12,  other nutrient deficiency like zinc, iron, and also autoimmune diseases like alopecia.

As you now know, vitamin b12 helps in the production of red blood cells.

And when b12 deficiency occurs then that means there aren’t enough red blood cells to transport oxygen to the scalp and the hair follicles.

As a result, those cells starve and the rate of hair growth is stunted. Then, hair grows very slowly and increasingly falls out.

If you suspect you are losing more hair than usual, see your doctor and request they check your b12 levels.

Vitamin b12 is essential for the proper functioning of the brain and central nervous system.

Various studies show an association between deficiency and mental health problems including depression. A 2020 study in BMC Psychiatry demonstrated this association.

Vitamin b12 is required for neurologic functions. A deficiency can lead to depression, dementia, and even psychosis.

Several case studies in Neurological Medicine 2016 present clear evidence of psychosis and behavioral changes, including dementia that was reversed by the administration of vitamin b12.

Also, research shows that a b12 or folate deficiency can lead to an accumulation of homocysteine, a byproduct of protein breakdown.

And when homocysteine accumulated it then leads to DNA damage, the formation of amyloid proteins which contributes to conditions such as Parkinson’s, vascular dementia due to damage of blood vessels in the brain, bipolar disorder, epilepsy, and many neuropsychiatric conditions.

In vitamin b12 deficiency, one may experience a smooth, thick, beefy tongue also known as glossitis. The tongue is red inflamed and can be painful. Other mouth problems like stomatitis can also occur.

However, other vitamin deficiencies can cause glossitis and stomatitis as well so having blood work done is essential to establish the cause.

If B12 deficiency is not treated, it can lead to serious complications such as neurological problems including myasthenia gravis, autoimmune diseases like Hashimoto’s, rheumatoid arthritis, and diabetes type 1.

Other complications may include gastric cancer and even heart failure a complication due to anemia( source).

Treatment of vitamin b12 deficiency

It is important that your health care provider investigate your symptoms carefully as b12 deficiencies can be mistaken for other health problems.

And unfortunately, for the same reason, symptoms may be ignored or misdiagnosed meaning treatment is also delayed.

So if you suspect that you may have a b12 deficiency see your doctor. If B 12 deficiency is suspected or to rule out other problems, your doctor will order the following Labs:

After a diagnosis is made, the doctor then will want to confirm the reason you have a vitamin 12 deficiency to determine the best treatment for you.

If your problem is a lack of sufficient intake of food, foods rich in b12 will be recommended.

In cases of impaired absorption due to gastritis, gastric bypass, or intestinal conditions such as Crohn’s,  or other autoimmune conditions, then b12  injections are given.

Depending on the level of deficiency big dose of b12 supplementation may be recommended.

If you think you may have a vitamin b12 deficiency, see your doctor for a diagnosis and to determine the cause and appropriate treatment. 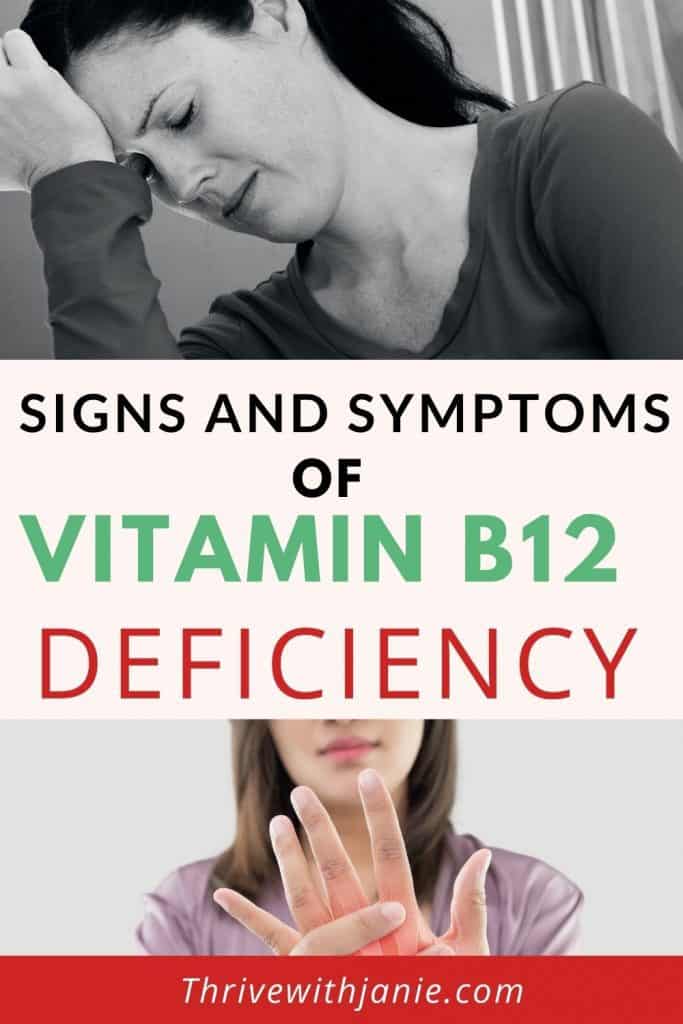 Vitamin deficiencies that cause fatigue 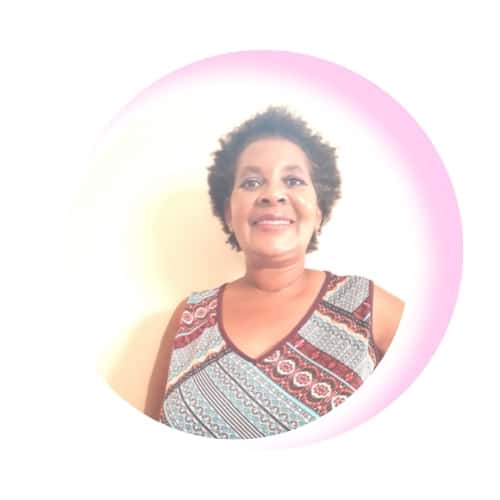